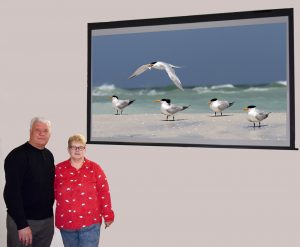 It was probably a lot warmer in Florida than in Grindleton on Tuesday night, but nature photographers  Kitty and Geoff Walsh brought their own warmth with them. Members of the Chorley Club, their photography was of the highest quality, National Geographic magazine having publishing a number of their photographs.

They were a little reluctant to visit Florida at first but are now regular commuters. The best time is December and January for the arrival of the migrating birds; April and May are the months for nesting.  However the otters, crocodiles, racoons and many other animals are around at all times. However, the sun is too hot in the summer months for comfort.

Extraordinary photographs by Geoff settled a controversy which had been around for many years. There were reports of otters successfully attacking crocodiles, but most people did not believe it was possible. Geoff was in the right place at the right time and his photograph has been used by National Geographic no less than five times. Amusingly, a visitor with his family was noisily dismissive of the possibility and finally said he would like to meet the man who took the picture. Kitty, who was standing nearby, said quietly. “He’s over there, why not speak to him!”

February starts with folios from the Inter-Club Photographic Alliance and the Lancashire and Cheshire Photographic Union. The club meets at 7:30 on Tuesdays at the Grindleton Pavilion. Photographic enthusiasts are invited to come and see what the club does before deciding to join.